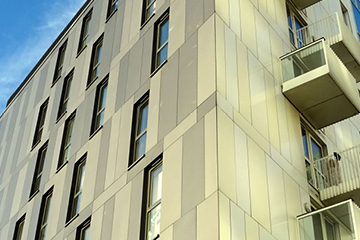 Cladding has become one of those issues for strata managers that can cause complete headaches with little relief in sight. When an owners corporation is faced with the excessive costs associated with the rectification works due to the installation of inappropriate cladding, they will obviously want to pass that cost off where they may be able to. The question is who will the Courts consider to be the liable party for damages in such cases?

The owners corporation of the Lacross Tower building in Melbourne was faced with this question after their building was damaged in 2014 by fire which spread by flammable cladding used in its construction. A claim for damages was made against the builder in the Victorian Civil and Administrative Tribunal (VCAT) and a decision was handed down earlier this year that the builder was liable for the damages. However, that liability and the damages awarded were to be shared amongst the architect, the fire engineer, the certifier and the person responsible for the blaze initially (being a tenant).

The central finding of the Tribunal was that the primary cause of the spread of the fire was the use of an Aluminium Composite Panel (ACP) with 100% polyethylene core as the external cladding, noting that polyethylene has a calorific value similar to petrol, diesel and propane.

Under a design and construct contract with the developer, the builder was primarily responsible for the external cladding selected. The builder claimed that the building certifier, the architect, the superintendent and the fire design engineer all failed in their “duty of care” to provide warning of the potentially disastrous consequences of that selection.

Whilst the judge has stated that his decision was that the builder was liable, due to contract issues the costs should be apportioned to each of the above mentioned because the builder did not have a good enough knowledge of Aluminium Composite Panels (ACPs) fire risk and as such relied on the contracts with specialists in the industry. The split and the decisions for the split are as follows:

It should be noted that the Certifier was ordered to pay 33% of the costs because they failed in:

The fire engineer was found to hold 39% of the liability as they had failed to:

When assessing what the options are for the owners corporations who are dealing with rectifying cladding issues, encourage them to discuss with their legal representative who may be liable in relation to the defects of their building, because the above case shows that the builder may not be the only one responsible for the rectification costs.